Ah, memories of youth! Few things were as pleasurable to me as waking up early Sunday morning to retrieve the newspaper and devour the comics. I read everything, but I had favorites.

Here are five of them:


1) Calvin and Hobbes. I started to read Calvin and Hobbes in 10th grade (1985-6), and was immediately taken with it. Calvin was the quintessential wise-ass kid. Hobbes was an equal, not a sidekick or gimmick. Together, their observations and adventures were a first everyday encounter with beauty for me. Creator Bill Watterson's Sunday layouts were gorgeously drawn. Even today I see some of those pictures in my mind. And of course, I still have some of the books in my home. 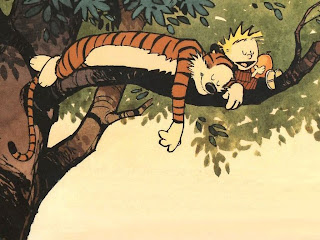 2) Doonesbury. I loved the political subject of Doonesbury, but what hit me--and many other readers too, I suspect--was that the strip really told the story of a group of friends. It was the story of their lives. Garry Trudeau showed that their lives, like our own, were deeply political. 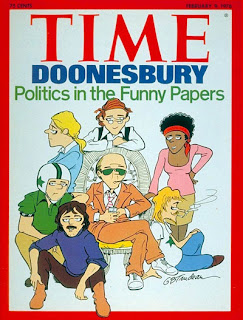 3) Garfield. Don't give me crap about this one. Garfield was somewhat new when I was a kid. The Garfield I remember was a hilarious character--shrewd, grumpy, insistent, sometimes just mean. Jon, Garfield's owner, wasn't such a goofball. The strip began to suck for me when it became more of an ensemble piece, but it was grand once. It helped that I had a cat at home that seemed kind of like Garfield.

4) Bloom County. For a while, Bloom County was a big deal. It was like Doonesbury but edgier and more outrageous. For me, the strip was at its best when Opus and Steve Dallas were more like bit players and not the focus. Opus was always an engaging character, both naive and intrepid, but I liked Binkley, Binkley's Dad, Cutter John, Milo, and the other woodland creatures. That's when it was a strip about growing up in Reagan-era America--when it was OK to act as though pretty lies were true. 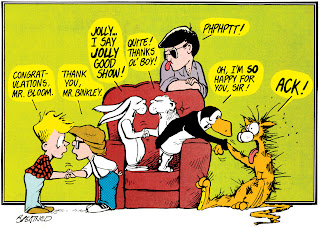 5) The Far Side. The Far Side was always a popular comic. It always seemed to capture the strangeness of modern life. The balance of image and caption was always flawless. 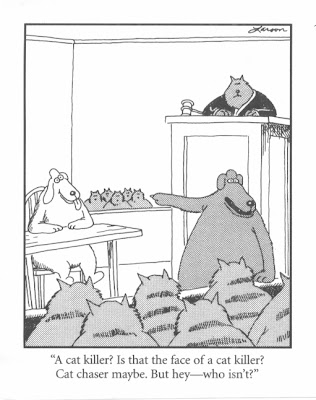 I have some books of my favorite strips, but otherwise I don't think my children will ever engage comics in print. That's a little sad, isn't it?