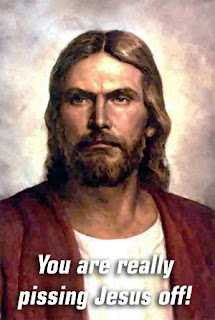 [Everyone acts like a dick. Him too.]
According to the Urban Dictionary, definition number two for the noun "dick" is:

Stop being such a dick.

Now, let's read the story of a guy who's all for family--just not dead family.


Matthew 8: 18-22
When Jesus saw the crowd around him, he gave orders to cross to the other side of the lake. Then a teacher of the law came to him and said, "Teacher, I will follow you wherever you go."

Jesus replied, "Foxes have holes and birds of the air have nests, but the Son of Man has no place to lay his head."

Another disciple said to him, "Lord, first let me go and bury my father."

But Jesus told him, "Follow me, and let the dead bury their own dead."

Let the dead bury their own dead? Seems rather abrasive, and apparently when he died his followers didn't take the advice. So, he doesn't think we should worry about dead relatives. Maybe he thinks a bit differently when it's his own family involved.


Luke 14:25-27
Large crowds were traveling with Jesus, and turning to them he said: "If anyone comes to me and does not hate father and mother, wife and children, brothers and sisters—yes, even their own life—such a person cannot be my disciple. And whoever does not carry their cross and follow me cannot be my disciple."

He replied to him, "Who is my mother, and who are my brothers?" Pointing to his disciples, he said, "Here are my mother and my brothers. For whoever does the will of my Father in heaven is my brother and sister and mother."

Relax, dude! It's OK to acknowledge your mother and your brothers. Sounds like a teenager at the mall with his friends. Maybe he's one of those guys who is kinder to strangers?


Matthew 15:21-28
Leaving that place, Jesus withdrew to the region of Tyre and Sidon. A Canaanite woman from that vicinity came to him, crying out, "Lord, Son of David, have mercy on me! My daughter is suffering terribly from demon-possession."

Jesus did not answer a word. So his disciples came to him and urged him, "Send her away, for she keeps crying out after us."

He answered, "I was sent only to the lost sheep of Israel."

The woman came and knelt before him. "Lord, help me!" she said.

He replied, "It is not right to take the children's bread and toss it to their dogs."

"Yes, Lord," she said, "but even the dogs eat the crumbs that fall from their masters' table."

Then Jesus answered, "Woman, you have great faith! Your request is granted." And her daughter was healed from that very hour.

At least he finally had a change of heart. How loving! How about some love for your buds?


John 2:13-16 (See also Matthew 21:12-13; Mark 11:15-18)
When it was almost time for the Jewish Passover, Jesus went up to Jerusalem. In the temple courts he found men selling cattle, sheep and doves, and others sitting at tables exchanging money. So he made a whip out of cords, and drove all from the temple area, both sheep and cattle; he scattered the coins of the money changers and overturned their tables. To those who sold doves he said, "Get these out of here! How dare you turn my Father's house into a market!"

He made a whip, and then used it on people. Is this not rather extreme?

Well, maybe he's one of those dudes who's only nice to those in his posse.


Matthew 16:21-28
From that time on Jesus began to explain to his disciples that he must go to Jerusalem and suffer many things at the hands of the elders, chief priests and teachers of the law, and that he must be killed and on the third day be raised to life.

Peter took him aside and began to rebuke him. "Never, Lord!" he said. "This shall never happen to you!"

Jesus turned and said to Peter, "Get behind me, Satan! You are a stumbling block to me; you do not have in mind the things of God, but the things of men."

Then Jesus said to his disciples, "If anyone would come after me, he must deny himself and take up his cross and follow me. For whoever wants to save his life[h] will lose it, but whoever loses his life for me will find it. What good will it be for a man if he gains the whole world, yet forfeits his soul? Or what can a man give in exchange for his soul? For the Son of Man is going to come in his Father's glory with his angels, and then he will reward each person according to what he has done. I tell you the truth, some who are standing here will not taste death before they see the Son of Man coming in his kingdom."

Hmm. Calls his friend "Satan," demands obedience, and threatens everyone. I'm beginning to think this person is actually not very nice, but maybe he's kind to animals.


Luke 8:26-33
They sailed to the region of the Gerasenes, which is across the lake from Galilee. When Jesus stepped ashore, he was met by a demon-possessed man from the town. For a long time this man had not worn clothes or lived in a house, but had lived in the tombs. When he saw Jesus, he cried out and fell at his feet, shouting at the top of his voice, "What do you want with me, Jesus, Son of the Most High God? I beg you, don't torture me!" For Jesus had commanded the evil spirit to come out of the man. Many times it had seized him, and though he was chained hand and foot and kept under guard, he had broken his chains and had been driven by the demon into solitary places.

Jesus asked him, "What is your name?"

"Legion," he replied, because many demons had gone into him. And they begged him repeatedly not to order them to go into the Abyss.

A large herd of pigs was feeding there on the hillside. The demons begged Jesus to let them go into them, and he gave them permission. When the demons came out of the man, they went into the pigs, and the herd rushed down the steep bank into the lake and was drowned.

Drives...pigs...off...a..cliff. The owner of the pigs must have been thrilled to watch his source of livelihood fall over the edge. Jesus might have suggested that the demons not go into the feeding pigs but rather just go the hell away. Seems like this was an odd time to show mercy to the wrong beings.


Mark 12-14
The next day as they were leaving Bethany, Jesus was hungry. Seeing in the distance a fig tree in leaf, he went to find out if it had any fruit. When he reached it, he found nothing but leaves, because it was not the season for figs. Then he said to the tree, "May no one ever eat fruit from you again." And his disciples heard him say it.


Matt. 21:18-22
Early in the morning, as he was on his way back to the city, he was hungry. Seeing a fig tree by the road, he went up to it but found nothing on it except leaves. Then he said to it, "May you never bear fruit again!" Immediately the tree withered. When the disciples saw this, they were amazed. "How did the fig tree wither so quickly?" they asked.

Jesus replied, "I tell you the truth, if you have faith and do not doubt, not only can you do what was done to the fig tree, but also you can say to this mountain, 'Go, throw yourself into the sea,' and it will be done. If you believe, you will receive whatever you ask for in prayer."

Understanding the "lesson" being taught--is this the best way the "Son of God" has to teach? Perhaps a PowerPoint presentation could have communicated the message just as well?

I don't know. Maybe the guy's a pacifist:

Clearly, this person that comes through in these passages does not quite live up to his contemporary PR. This is a person who can be insensitive, obtuse, aloof, arrogant, violent, threatening, hysterical, and egocentric. Whatever his nice and pleasant attributes, this does not seem to be a person of superior moral standing. Yet, his fans tell us that we just don't understand Jesus like they do.


Without question there is no more beautiful, loving and wonderful person to have walked the earth than Jesus Christ. He is known even by his critics as a loving, forgiving and gracious person. It was even difficult for his enemies to find fault with him when he was present with us.

Personally, I think a much stronger case can be made for the Buddha as the most "beautiful, loving and wonderful person to have walked the earth." Of course, both Jesus and Buddha spawned religions with plenty of nuttiness. 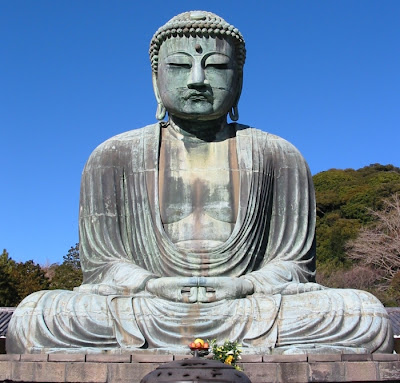