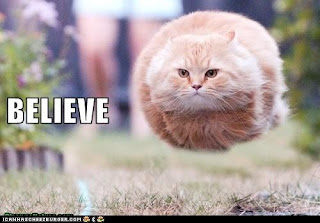 This past weekend, I chilled out on the couch with my kids. We watched a program re-telling "Jack and the Beanstalk." In this version, Jack receives the magic beans from a roadside vendor. The vendor advises that the beans only work if you believe in magic. The tale's hero, of course, believes in magic.

The "you gotta believe" idea--what I call the magical thinking trope--appears a lot in kids' movies and shows. When a story uses magical thinking, the character who doesn't believe or who is skeptical always gets shown up by the power of belief. For instance, the heroine who knows in her heart there is a "diamond castle" that can be called into existence by singing a song--she will prevail. In another program, the skeptical character will eventually be forced to admit that there are powers beyond rational and scientific explanation.

I don't see the point of putting magical thinking out on TV like this. Maybe it has something to do with an ideal of childhood--a time when magic seemed real and wonder abounded. But I think the producers have it wrong. Look at most any Bugs Bunny cartoon, universally smarter and funnier than today's kiddie pablum. In these animated shorts, humor comes from the fun of being able to violate reality. In the classic Bugs joke, he defies the law of gravity, but then notes he never studied law. 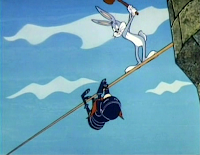 Bugs cartoons play with magical thinking; they never take it seriously, and never promote it as a life value.

The magical thinking of today's kiddie media comes with an ugly downside, too. When you tell the little darlings that magic is real you also tell them monsters are real. They have to accept both. The world of fairies and demigods by necessity includes sorcery and demons. The world of Jesus is the world of Satan. The world of the faithful is the world of infidels. You open their hearts to both wonder and terror; you cannot shut out the scary.

In contrast, a world without magic is a world where power comes from the mind, the will, the body, the community, the resources, and the technology. Who manages these is best positioned to influence the world. There are no magic spells in this world, only knowledge and power. There are no hidden helpers, only one's friends and one's network. There are no gods to please, only a society to contribute to. There are no devils to resist, only bullies.

There is both wonder and terror in this world, too. There is scary. The difference is that we are part of it all. In the magical world, the dram of good an evil happens on some other plane, hidden from us except for the magic that brings it out.

There's no need for magical thinking. We can have fantasy movies without bolstering general superstition. We can dramatize positivity without advocating miracle-dependence. We can promote imagination and creativity without endorsing irrationality.

Reality may be scarier than fictional monsters, at least at times and for some people. But reality is certainly far better than magic.
Posted by Larry Tanner