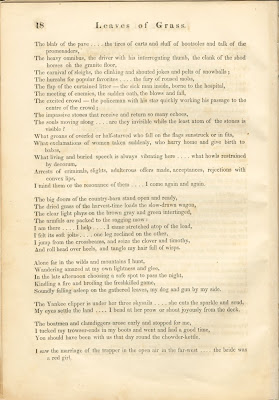 On Page 18 Whitman continues his argument on the ubiquity of the poet, on the great scope of the poet's eye, and on the connectedness of this teeming American life...and death.

Earlier, Whitman had shown us a suicide, but now he pans across an American mob:


The blab of the pave . . . . the tires of carts and sluff of bootsoles and talk of the promenaders,
The heavy omnibus, the driver with his interrogating thumb, the clank of the shod horses on the granite floor,
The carnival of sleighs, the clinking and shouted jokes and pelts of snowballs;
The hurrahs for popular favorites . . . . the fury of roused mobs,
The flap of the curtained litter—the sick man inside, borne to the hospital,
The meeting of enemies, the sudden oath, the blows and fall,
The excited crowd—the policeman with his star quickly working his passage to the centre of the crowd;
The impassive stones that receive and return so many echoes,
The souls moving along . . . . are they invisible while the least atom of the stones is visible?
What groans of overfed or half-starved who fall on the flags sunstruck or in fits,
What exclamations of women taken suddenly, who hurry home and give birth to babes,
What living and buried speech is always vibrating here . . . . what howls restrained by decorum,
Arrests of criminals, slights, adulterous offers made, acceptances, rejections with convex lips,
I mind them or the resonance of them . . . . I come again and again.

Although I used the word "pans," the visual metaphor is not quite right because Whitman draws in sounds and the feeling of vibrations also. Whitman then moves us away from the crowd and immerses us in a country scene:


The big doors of the country-barn stand open and ready
The dried grass of the harvest-time loads the slow-drawn wagon,
The clear light plays on the brown gray and green intertinged,
The armfuls are packed to the sagging mow:
I am there . . . . I help . . . . I came stretched atop of the load,
I felt its soft jolts . . . . one leg reclined on the other,
I jump from the crossbeams, and seize the clover and timothy,
And roll head over heels, and tangle my hair full of wisps.

How easy we've made this transition! How powerful the contrast between that tension before and the reposition now.

Next, we'll ascend mountains, view the sea, and return to a sense of the social:


Alone far in the wilds and mountains I hunt,
Wandering amazed at my own lightness and glee,
In the late afternoon choosing a safe spot to pass the night,
Kindling a fire and broiling the freshkilled game,
Soundly falling asleep on the gathered leaves, my dog and gun by my side.
The Yankee clipper is under her three skysails . . . . she cuts the sparkle and scud,
My eyes settle the land . . . . I bend at her prow or shout joyously from the deck.

The boatmen and clamdiggers arose early and stopped for me,
I tucked my trowser-ends in my boots and went and had a good time,
You should have been with us that day round the chowder- kettle.

On this page, Whitman stresses "being there"--being amid the din of the market, being out by the country barn, being in the mountain woods as a solitary hunter, being with mates by the chowder kettle. He dips us in the environments of the page with simple impressions. He invite us, cajoles us, and intimates that not to leap in ourselves is to miss out on a "good time."
Posted by Larry Tanner