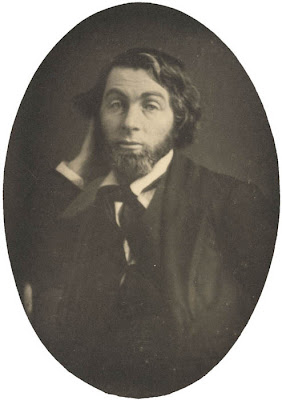 Hmm. Let's think about it. What is this beginning?


AMERICA does not repel the past or what it has produced under its forms or amid other politics or the idea of castes or the old religions . . . . accepts the lesson with calmness . . . is not so impatient as has been supposed that the slough still sticks to opinions and manners and literature while the life which served its requirements has passed into the new life of the new forms . . . perceives that the corpse is slowly borne from the eating and sleeping rooms of the house . . . perceives that it waits a little while in the door . . . that it was fittest for its days . . . that its action has descended to the stalwart and wellshaped heir who approaches . . . and that he shall be fittest for his days.

Is this poetry or prose?

No matter if it's one or the other, or both. Whitman opens with America, with this vision of America standing wide armed in a green field. Whitman bursts his vision of America in language, and it's a language of newness, life, ranging perception, fitness (as health, as toughness), and days.

The poet and the soul, too, are main concerns. They feed one another for Whitman. They cloak America's grandeur:


The Americans of all nations at any time upon the earth have probably the fullest poetical nature. The United States themselves are essentially the greatest poem.

Here are the roughs and beards and space and ruggedness and nonchalance that the soul loves. Here the performance disdaining the trivial unapproached in the tremendous audacity of its crowds and groupings and the push of its perspective spreads with crampless and flowing breadth and showers its prolific and splendid extravagance. One sees it must indeed own the riches of the summer and winter, and need never be bankrupt while corn grows from the ground or the orchards drop apples or the bays contain fish or men beget children upon women.

Whitman's long beginning, which I will not labor over here and now, lays out the new poem he has devised. It explains, justifies, and theorizes his poem and his vision of American poetry.

I love the bigness of this beginning and of Leaves of Grass generally. I love the audacity. Yet Whitman recalls humility and wisdom just as well:


The poems distilled from other poems will probably pass away. The coward will surely pass away. The expectation of the vital and great can only be satisfied by the demeanor of the vital and great. The swarms of the polished deprecating and reflectors and the polite float off and leave no remembrance. America prepares with composure and goodwill for the visitors that have sent word. It is not intellect that is to be their warrant and welcome. The talented, the artist, the ingenious, the editor, the statesman, the erudite . . they are not unappreciated . . they fall in their place and do their work. The soul of the nation also does its work. No disguise can conceal from it . . no disguise can conceal from it. It rejects none, it permits all. Only toward as good as itself and toward the like of itself will it advance half-way. An individual is as superb as a nation when he has the qualities which make a superb nation. The soul of the largest and wealthiest and proudest nation may well go half-way to meet that of its poets. The signs are effectual. There is no fear of mistake. If the one is true the other is true. The proof of a poet is that his country absorbs him as affectionately as he has absorbed it.

Whitman is an unwavering poet of courage and of work, and this is why I read him and honor him. I will try, unafraid, to meet him where he stands and to talk openly about the work before us.
Posted by Larry Tanner