Get (in) the Picture 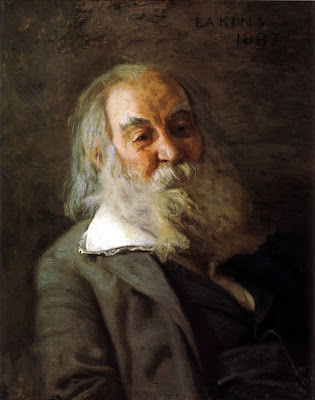 [Thomas Eakins, Portrait of Walt Whitman, 1887-8.]
Page 19 of Leaves of Grass begins by continuing the portrait of a wedding. The full section, beginning on page 18, reads as follows:


I saw the marriage of the trapper in the open air in the far-west . . . . the bride was a red girl,
Her father and his friends sat nearby crosslegged and dumbly smoking . . . . they had moccasins to their feet and large thick blankets hanging from their shoulders;
On a bank lounged the trapper . . . . he was dressed mostly in skins . . . . his luxuriant beard and curls protected his neck,
One hand rested on his rifle . . . . the other hand held firmly the wrist of the red girl,
She had long eyelashes . . . . her head was bare . . . . her coarse straight locks descended upon her voluptuous limbs and reached to her feet. 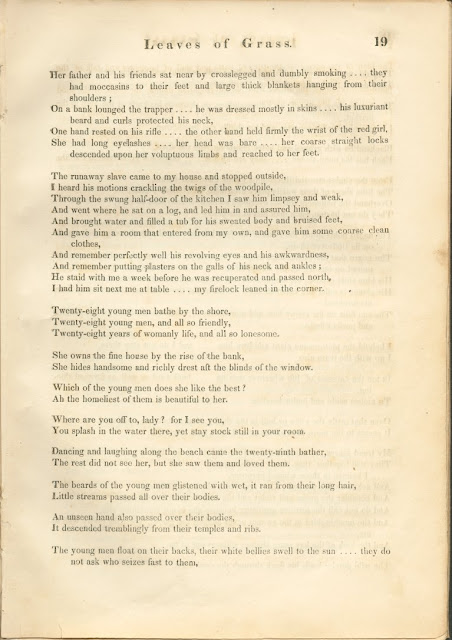 The juxtaposition of the trapper's hands on a rifle and then the bride's wrist is slightly troubling. The scene seems hard and natural in a rather brutal sense, not like the shows of ostentatious romanticism we might normally associate with American weddings. The lounging trapper recalls the loafing, leaning poet. Hair has an interesting role here, the beard of the trapper and the locks of the girl: full hair, associated with luxury and sexual appeal.

The next scene involves a runaway slave come to the door:


The runaway slave came to my house and stopped outside,
I heard his motions crackling the twigs of the woodpile,
Through the swung half-door of the kitchen I saw him limpsey and weak,
And went where he sat on a log, and led him in and assured him,
And brought water and filled a tub for his sweated body and bruised feet,
And gave him a room that entered from my own, and gave him some coarse clean clothes,
And remember perfectly well his revolving eyes and his awkwardness,
And remember putting plasters on the galls of his neck and ankles;
He staid with me a week before he was recuperated and passed north,
I had him sit next me at table . . . . my firelock leaned in the corner.

This fraternity in the scene, the hospitality described, contrasts with the wedding scene, where the girl's father and friends silently keep distance.That family is covered while the scene here involves openness, invitation, and intimacy--such an ironic reversal of the marriage!

Then, suddenly, we enter a scene of the twenty-eight young men and the 28-year-old woman. We engage a narrative roiling together the preceding themes of sociability, intimacy, openness, voluptuousness--and hair, skin, bareness, and touch:

She owns the fine house by the rise of the bank,
She hides handsome and richly drest aft the blinds of the window.

Which of the young men does she like the best?
Ah the homeliest of them is beautiful to her.

Where are you off to, lady? for I see you,
You splash in the water there, yet stay stock still in your room.

Dancing and laughing along the beach came the twenty-ninth bather,
The rest did not see her, but she saw them and loved them.

The beards of the young men glistened with wet, it ran from their long hair,
Little streams passed all over their bodies.

An unseen hand also passed over their bodies,
It descended tremblingly from their temples and ribs.

These famous lines shocked me maybe 20 years ago. Surely, readers in 1855 must also have been surprised at the forthright vision of bodies at play, bodies in desire. 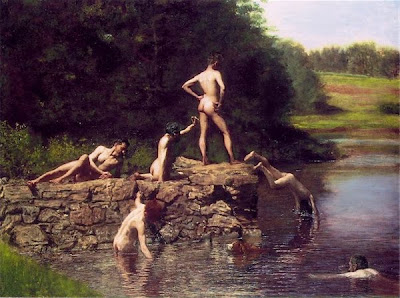 
Eakins’s ideas about the human body find an interesting parallel in the poetry of Walt Whitman, and indeed, they may have been acquired from Whitman, at least to a degree. This attachment to Whitman survives from the records of Eakins’s students—they called themselves “the Whitmans.” Eakins admired Walt Whitman tremendously. He painted Whitman’s portrait and developed a rapport with the poet, and Whitman appreciated Eakins extraordinary vision–calling on him to speak at a testimonial dinner and then remembering that Eakins did his speaking through a medium other than words. Eakins was particularly taken by the Song of Myself. The painting The Swimming Hole seems unmistakably inspired by the passage quoted above from it, and Eakins himself, referring to it as one of “his Whitmans,” would support this reading. It’s a remarkable example of a poem realized in oil and canvas.

Notice that Eakins, like Whitman, inserts (an avatar of) himself into the scene. I think of the poem and the painting together as examples of keen observers and communicators striving to realize both life and thinking in art.
Posted by Larry Tanner