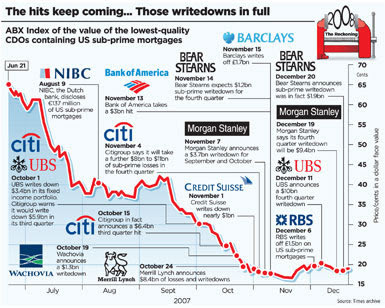 We are about five years and one month past the financial meltdown, when America's largest and most prestigious banks could no longer hide the fact they were in big trouble--and were taking everyone else with them.


It's hard to believe, but it's been five years and a day since the U.S. financial system's problems surfaced, and we're still not even remotely close to being able to feel good about the economy. My admittedly arbitrary start date is June 12, 2007, the day the Wall Street Journal reported that two Bear Stearns hedge funds that owned mortgage securities were in big trouble. At the time, things didn't seem all that grim -- in fact, U.S. stocks hit an all-time high four months later. But in retrospect the travails of the funds, which collapsed within weeks, were a tip-off that a crisis was afoot. Problems kept erupting, efforts to restore calm failed, and we trembled on the brink of a financial abyss in 2008-09. Things have gotten better since then, but still aren't close to being right.

There's a long way to go before the economy, and people, recover from wounds inflicted by the financial meltdown. The value of homeowners' equity -- most Americans' biggest single financial asset -- is down $4.7 trillion, about 41%, since June 2007, according to the Federal Reserve. The U.S. stock market has lost $1.9 trillion of value, by Wilshire Associates' count. Even worse, we've got fewer people working now -- 142.3 million -- than then (146.1 million), even though the working-age population has grown. So while plenty of folks are doing well and entire industries have recovered, people on average are worse off than they were. Bad stuff.

Sloan observes that only five years away from these shattering events, myth is already displacing reality (and some people wonder why I distrust the reliability of the gospel accounts of Jesus and such.)

Sloan reminds us of the facts. I'll just list them here. Go read the article.

Sloan's article generated reaction. In a follow-up article, he brought out more facts and reasoning to deal with the rabble. First he deals with the cries over Myth #1, the myth that the government shouldn't have done anything:

Dozens of commenters said that cleaning up the mess should have been left to the private markets, which would have done things better than the Federal Reserve, Treasury, and rest of the government did.

What most of those people probably don't realize, though, and what I had no room to discuss in my last column, is that private markets took the first big swing at recapitalizing troubled financial institutions -- and struck out.

Other objectors told Sloan the government should have done something else. He dispenses with this line of thinking, too.

The alternate complaint -- that the government should have nationalized troubled institutions -- sounds plausible too. But that strategy stood no chance of working, regardless of how things played out in other countries. First, seizure would have resulted in endless litigation. Second, there were practical problems. For example, when I looked into the consequences of the government nationalizing Citi, I discovered (from independent third parties) that Citi most likely would have had to surrender lucrative franchises in several foreign countries that don't allow banks there to be owned by foreign governments.

A third complaint made to Sloan dealt with Myth #5, that the government was really to blame for the financial meltdown. Sloan explains why this is bunk:

The other widespread criticism was of my last point: that although the government lowered some mortgage loan standards, the debacle is primarily the private sector's fault. I was attacking the oh-so-convenient myth that private markets are blameless and pure, that the whole problem comes from misguided government efforts to help "those people" get homes they couldn't afford. Many commenters were, shall we say, displeased.

Well, let's see. Most of the bad mortgages were made to supposedly qualified borrowers, without pressure from the government. Lenders required little in the way of down payments or credit checks; they wanted to juice up their loan volume. Credit-rating agencies gave AAA ratings to trash, to keep fee income flowing. Yield-hungry investors snapped up garbage that bore the agencies' imprimatur. Private enterprise all the way.

Sloan closes by reminding all of us just how bad it was five years ago.

Credit default swaps and other esoterica spread the problems worldwide, magnified losses, and put even the soundest institutions at risk. That's because if giant, less sound institutions had failed en masse, they would have defaulted on their obligations to their sounder trading partners.

We also need to remember that for all the criticism (including mine) of particular tactics, Hank Paulson and Tim Geithner and Ben Bernanke bailed out the U.S. financial system at no net expense to America's taxpayers. An impressive achievement.

Instead of a discussion about what happened, we've gotten into a government-vs.-free-market shoutfest. These fragmented days, many people tend to see things in black and white terms, in ways that reinforce what they want to believe. The real world is more complicated than that. Black and white have their places -- but to understand the financial meltdown, you need to see some gray.

To me, the big takeaway is that the financial meltdown was caused and magnified by bad business and poor regulation. And although the crisis was mitigated by cooperation between business and government, we still need lots of partnership, transparent decision making, and cool-headed leadership on both sides.

We need business to step up and we need government to stay involved and proactive.
h
Posted by Larry Tanner