I'm Dreaming of Some White Christians 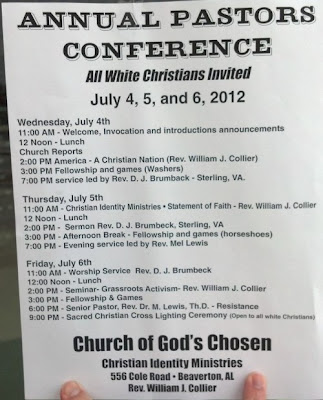 I mentioned recently that I was all "meh" on religion these days. It's true. I don't feel inspired to comment on matters of religion and atheism right now. Part of the problem is that I very much want to say something original. I want to get into issues. I don't simply want to link to stories or other blog posts, and I don't want only to point and laugh at religious beliefs.

Here is a story worth thinking about, an advertisement for a "white Christians" gathering in Alabama. MSNBC reports:


A three-day whites-only religious conference — which will conclude with a flaming cross — in Lamar County, Alabama, has some residents upset at the racist implications while the minister complains that his freedom of speech is being violated.

"Yes, we believe that the Europeans and their descendants are the chosen people of God," according to the website for Christian Identity Ministries, which is holding the event with Church of God’s Chosen. "We believe this, not because we think that the white race is superior, but because there is overwhelming proof in support of this belief. We do not back down from this belief, because we are certain."

Some local residents learned of the July 4-6 gathering after the group posted fliers promoting their fourth annual pastors conference, announcing "All White Christians Invited," according to a report by WBRC in Birmingham.

"It was put up throughout the town in the middle of the night. (It was) when everyone was asleep without the permission of the business owner," said Tyler Cantrell, manager of Norris Music in nearby Winfield, Ala., the report said.

According to the flier, the three-day conference, being held in a rural area, will end with a "Sacred Christian Cross Lighting Ceremony."

From this story, the feature that strikes me first is the distinction:

My Jewish background gives me some perspective on the "chosen" issue. The teaching from the rabbis was always that "chosen-ness" was a bad use of terms. God honored Israel by giving the Torah to them, and through them to humankind. They told us that being Jewish was not a matter of superiority but a matter of priority: we were the first to know God and His Holy Law, and to know a mission for ourselves to be a light unto the nations.

Now, this ministry says that Israelites (and by extension, modern Jews) have been replaced by European Christians. Co-opting the chosen-ness idea is hardly new. I once attended a speech by Louis Farrakhan that claimed Black Americans were chosen. The DNA of Abrahamic religions seems to hold this pernicious idea that a single swath of people has more of God's favor than other peoples.

While it's not surprising that this group claims the mantle of God's favor, it is unexpected that they insist not to be racist. There is "progress" here, in a sense. They seem not to conceive of Black people as the enemy. They seem not to consider Jews, Muslims and Asians to be lower or lesser humans. In the Alabama flier, the "Sacred Christian Cross Lighting Ceremony" reads to me as a specific attempt to divest cross-burning from its associations with KKK and their anti-Black terror campaigns.

Is the ministry racist? Of course. But they certainly are conflicted. They like being white and feel it's pretty cool. They may even feel as though the world-at-large doesn't (or no longer, to put the matter into narrative form) value racial whiteness as it should. Yet they also sense the moral wrongness of racism. They want racial coherence and perhaps insularity; they also tolerate the diversity of the world beyond their group. And so, they bury their racism by downplaying how great it is to be white and chosen--it's the "Mo' money, mo' problems" argument.

Let's close by hearing some of the comments on the story. One person says:

This, of course is not helpful, although we all get the joke. I think the good thing that atheist criticism can add here is to ask whether this event is strictly provincial. We atheists ask whether the exclusion of this group is really so different from exclusive practices that are normal to mainstream Christianity: exclusion of women, homosexuals; the insularity of church leadership; the place of Christians generally at the top of the holy heap, above Jews and Buddhists and atheists.


These people obviously didn't get what Jesus was trying to say.

Riiiight. Because Jesus was saying what YOU say he was saying.


And did the Black Caucus or The Black Law Students Association get the message too. Or maybe you need to attend a meet of the African Americans For the re-election of Obama and ask them if they got his message. Don't tell me you don't know of all of these organizations. Maybe you know the Black Panthers then. This is just the same people doing their usual racist things....but they are not whites...Right!

So tell me I am racist now....I'm not black and I am tired of everyone like Jesse Jackson and Al Sharpton telling me I'm racist because I'm white and not black too......get over it. We are not all black here it this country. Just look at the President....he's not all black either. Is he?

Here's the history buff chiming in:


Overwhelming proof? Really? Don't know how to break this to you Rev, but "the white race" (my ancestors) were pagan until they were dragged kicking and screaming into Christianity; ever heard of Charlemagne? Charlemagne, or "Karl the Butcher" as he was lovingly known by the Saxons, force converted Western Europe just as Jesus would...by torture and murder. So tell me, with that history, and being that Christianity, Judaism, and Islam originated in the middle-east, and each of the three claim to be God's "chosen" people...what could possibly be your overwhelming proof...ROFLMAO!!!

One more comment on how one bad Christian group does not Christianity make:

All they are doing is trying to get news. That church (if you can call it that) been around for awhile and now they made front page on a left leaning site... wow.

Don't even try to associate all Christian with this ... All real Christians denounce this and so do I. It their deal not Christs.

There are more comments I could post, including the ones on how Jesus was dark-skinned and Jewish, on how we all came from Africa, and inroads to Obama/Romney. But it's time to sum up.

The takeaways from the story are (1) that co-opting earlier identities, narratives, and status (as in connecting myself or my group to Israel at Sinai) is part of what religion enables; (2) that overt, hostile racism and bigotry may be on the decline; and (3) we have lots of stock responses to stories like the "white Christians" gathering, but the gathering is really just one manifestation of what groups do (setting 'in' and 'out'-group boundaries) and of what seems endemic to Western religious thinking.
Posted by Larry Tanner